Game of Thrones ★ I'm Tywin Lannister, Lord of Casterly Rock 〜 Which character are you？ 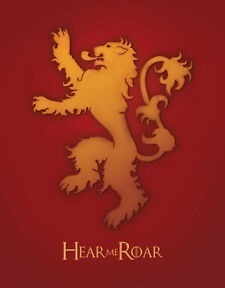 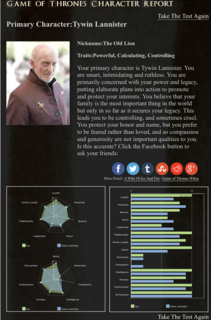 WOW... haha
I hope to have some Jaime and Cersei in me since they are my favorite characters... but oh well, I guess I'm too smart to be them... ( Jk...

So Tywin Lannister...
Am I that great？
I would say this is 80% right...
I'm so honored to be Tywin Lannister...
In fact, he was that smartest man in Game of Thrones, too bad he underestimated Tyrion and Jaime, the way he died, it was horrible... but he was the greatest, smartest, richest, most powerful man.
No doubt...

Father of my favorite beautiful twins, Cersei and Jaime.

Actually there were some aspects in Tywin that resemble me...
I can be calculating and cold-blooded if I want to.
Not all the time...
Also...to be honest, just like Tywin, I really dislike whores... both in fiction and reality ( well, i don't really encounter them personally in reality though. Good thing.)

So yah, actually I'm more similar to Tywin and I like him a lot more than Tyrion.

I'm not that smart, not powerful and not that controlling,though...
If I'm that smart, I guess I would be CEO of some top company by now...

Well, in real life, I cannot be cruel and mean...
I need to act nice and kind to get what I want sometimes...
It's easier to live that way.. ( I'm not a nice person actually...)
But if I'm in Westeros, I guess I could openly be more cruel...although I'm not psychopath like Joff or Ramsay...
I would do all I can for myself and my family to rise as high as possible... and to be honest, I don't think I will give a fuck about other families.
Another similarity of me and Tywin is that FAMILY ALWAYS COME FIRST.
I love my parents and brothers a lot more than anyone could think, but I love my family name too.
I have pride for that.

But Tywin... he was one of my most favorite characters, yet I did not support him as father...
He was mean to Tyrion but not only that, he was extremely unfair and cruel to Cersei as well.
Cersei needed more love from her father...
All his children, especially Tyrion and Cersei needed more love from him!!
So ya, he was BAD father... not the worst father in the show... much better than Stannis though.

I somehow thought he knew what was going on between Jaime and Cersei but he chose not to care, pretended not to see...because power was all that matters.. (He tried to raise them separately though...)

One thing I saw in Tywin which I found it very attractive was the fact that he loved his cousin-wife very much, he was faithful to her... When she was alive, there was still smile in his face...
The GAP was what made Tywin so interesting.

If today, Lady Joanna did not die, sure this family would be happier...
Jaime, Cersei, Tyrion, all might be happy.. (I still think Jaime and Cersei would have relationship though.. no one could stop them, not even their mother.)

Anyway here is the test.
Which character are you？ ↓
https://mygotcharacter.com/


Oh, by the way, my secondary character is Orena Tyrell...
haha, I never liked that old lady... クソババア
She was smart and cunning though... but never liked her.
She talked too much. Really talked too much.
She was mean to Cersei.
She called Cersei, monster but to me, she was an OLD UGLY MONSTER.
Double-standard hypocrite.
All characters could be monsters in that show. Not only Cersei. (I would say Cersei was monster when it came to her kids and when some bitch trying to manipulate her son. I would be too. Maybe worse. )
That old woman, her hatred for Cersei was more like... jealousy. OLD MONSTER!
Also, she died too easy, stupid Jaime.

At one point, I thought Tywin and Orena should hook up! Get married!!
Instead of plotting each other's kid to marry one another, why not married themselves off... LOL
Most powerful old couple. They would be the smartest of all.
They would not be able to have kids though... too OLD.

Besides I guess Tywin would not wanna take that old lady as his wife since his dead wife Joanna was extremely beautiful and he still loved her.

Anyway why do I keep getting all these old smart calculating characters!!
I guess I'm smart then. 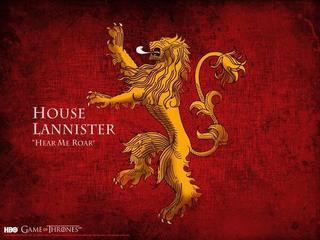