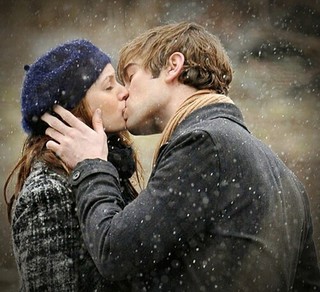 Scene from Gossip Girl in Central Park, Manhattan.
The CUTEST BEST LOOKING couple in Gossip Girl.
The Princess and the Prince of Upper East Side !!
Blair and Nate

Together since kindergarten and dated the longest time.
Almost like brother and sister and they were the sweetest.
They ended their relationship in season 2 in the show (just because the show-runners wanted more drama in more seasons, and wanted to ship every single characters with every single characters. )
But frankly speaking, I really thought if they hadn't dated so young and so early, they would have better chance to end up together as adults.
Maybe if they remained as best childhood friends and dated other random people to get more dating experiences; when they got older and more mature, maybe when they hit late-20s or even 30s, they might have realized that one another is the true love.

I have seen similar relationship like that in my own friends, and they got married in the end. LOL.
Only difference is that in the case of my friends, they never dated when they were kids.
They dated other people even though they had special feeling for each other, but they remained besties because they were too young to know what the special feelings was.
They loved each other as friends, and they were afraid to ruin things if they dated; so they took the long road. That's the road my friends took and I thought Nate and Blair should have taken as well.
Sometimes people need to get more dating experiences and grow up in order to realize what True love and REAL relationship are.
But anyway, Gossip Girl is teen drama, all I have to say is, Nate and Blair is the BEST looking and cutest in that show.
Cheers to The Princess and the Prince of Upper East Side !!


I'm currently back in US, staying at my bro's apartment in Manhattan.
It's warmer than usual but I heard there might be snow tomorrow.
Finally !!!!

I'm no big fan of snow though.
I would probably just stay in my room...
But whenever there is snow in New York,
I remember this scene from Central Park.
ahhhhhhhhhh.... Sweetest scene.
Winter KISS. 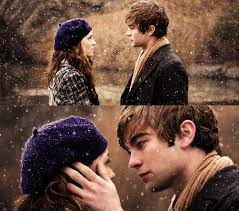