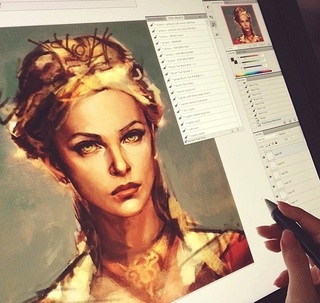 "in gold and silk and emeralds
cersei had been a queen, the next thing to a goddess." (quotes from ASOIAF)

"ser jaime lannister was twin to queen cersei;
tall and golden,
with flashing green eyes and a smile that cut like a knife." (quotes from ASOIAF)

I found this on twitter so I'm going to share it here.
I have also checked who the illustrator is because all the credits go to her!
Thank you, Alice X. Zhang for creating such a beautiful art of Jaime and Cersei.

Jaime is so handsome and SO much like the book Jaime even if you don’t tell me who is this, I would still say it’s the Golden Ser Jaime Lannister. The art describes him so well.
Cersei is beautiful as always. However, sadly I also can see the coldness in there which describes Cersei well ( except when she’s with Jaime, she’s soft).
Once she was teenager, she was full with life and cheerful just like Jaime...
However, betrayal and abuse from her husband, and fearing for the life of Jaime and her children have made her to become cold. She seldom smiles anymore...


Now let me introduce more on the illustrator.